This page is presently a rough overview of the product range pending the availability of more detailed information.

Based on findings from Kiyoto (in particular the Japanese patents), the different switch series are now treated as follows. The names, where unofficial, are largely arbitrary.

The three major types known to have been produced—sheet, dual-discrete and discrete—were all designed between 1979 and 1980, with the sheet type being the first one to be announced. The full-travel types (both discrete and dual-discrete) followed shortly afterwards. A patent for a different full-travel design was filed as early as 1977, but a switch matching this design has never been discovered. The dual-discrete design appears to have been updated around 1982 or so to reduce the height in line with German standardisation (forming the so-called “third generation”), but this is only speculation.

The oldest patent that Kiyoto found covers a switch similar to “third generation”. However, it has low leverage, and an external helical spring is used to accommodate the full switch travel. Unexamined patent S54-63279 A from 1977 covers this design. It is also shown in a later utility model from 1978, in both its unexamined (S55-49496 U) and examined (S58-29871 Y) versions. This utility model appears to be a revision to the patent, and revises the contact assembly structure design to cover melted lugs for securing the leaf spring, in addition to clip-on attachment of the spring.

The outlines within the drawing above match the image in the patent, but the colouring is a guess, as the drawing is not clear enough to understand, and is not backed up by additional views to show how it is assembled.

Such a switch has never been seen, and there is no indication as to whether it ever entered production. Curiously, this is a full-travel design, designed prior to FES-300.

“Sheet keyboard” (シートーキーボード) refers to a flat panel arrangement with keys printed onto a membrane cover. Below this are individual plungers over leaf spring contact assemblies: the plungers are pushed through the membrane. This design is a hybrid of pure membrane types (such as Datanetics batch fabricated array and early Commodore PET and Sinclair keyboards) and full-travel mechanical. Switch travel is a mere 1.3 mm (compared to 3.8 mm of full-travel leaf spring keyboards) and switch lifetime is only 10 million instead of the 50 million of the full-travel switches. These keyboards remain in limited production, and are snap action (clicky). The switches in these keyboards are named FES-300.

These keyboards are covered by Japanese utility model S54-150428U, filed in April 1978 and published in October 1979. According to Kiyoto, 雑誌FUJITSU 36(4)(207) reports that sheet keyboards came before “block” keyboards; this document is only available in print in selected libraries.

The datasheet for FKB3000 Series keypads refers to these as “FES-301S type”; for some reason, the switches moved series at some stage.

A later utility model (S55-178927U, below) gives a cross-section illustration of the sheet form:

Dual-discrete keyboards (so-called “second generation leaf spring”) use switches comprising two separate discrete parts: a high-leverage leaf spring switch assembly soldered to a PCB, and a plate-mounted plunger assembly. The high leverage of the leaf spring reduces the plunger travel of around 3.8 mm down to the short travel of the metal dome actuation, and this results in the switch assemblies being offset horizontally from the plunger assemblies. (The discrete switches stack opposing leaf springs to bring the switch assembly under the plunger.) Japanese utility model S55-178927U, filed in June 1979 and granted in December 1980, depicts these switches (and the aforementioned sheet type), but apparently as prior art:

These FES-301 switches seem to be rare, likely as they were redesigned soon afterwards to provide DIN compliance.

This type went into production as FES-360 Series, which at the time of writing (December 2020) is still in production, although only for existing customers, and apparently scheduled to be discontinue. The above illustration appears to be an approximate guide; FES-360 is covered far more precisely in Japanese patent S56-96418A (filed in December 1979) and US patent US4370533 (filed in December 1980). These documents show for example how the leaf spring passes all the way through the plunger and into the keystem (which may in fact offer it some reinforcement against being snapped). 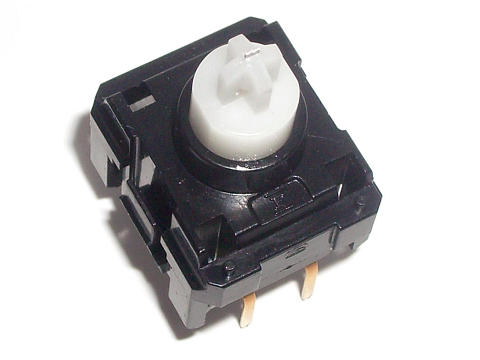 FES-360 has the advantage of being able to used fully discretely, unlike all of the other variants. The contact assembly is a clip-in block that attaches to the bottom of the switch, which implies that it was not the original design. The suggestion is that Fujitsu wanted to re-use the existing contact assembly design in a discrete switch, although they still had to significantly reduce the leverage of the actuator leaf to bring the switch assembly within the space of a single-unit 19 mm grid switch. The US patent indicates that this switch was designed for ease of assembly.

US patent 4529849 (filed in April 1984 and preceded by Japanese patent H0445924 in April 1983) covers two products. Chiefly it documents integrated membrane leaf spring. This type has never been observed: it replaces the metal dome contact assembly with one that uses a single key three-layer membrane that connects to a pair of solder terminals.

This is the second type introduced with the aforementioned patents. This is a standard three-layer membrane keyboard, using the revised leaf springs to press down on the membranes. This did enter production, and was used in some of Fujitsu’s desktop and laptop keyboards.

FES-301E switches are the DIN-compliant revision of FES-301 switches. They are effectively the same design but reduced in profile. The only written mention discovered to date of DIN compliance is in the FKB2500 Series datasheet, but Fujitsu provided the name of the series and explained that “E” denotes “ergnomic”. These keyboards are still in production at the time of writing (December 2020).

Unlike with FES-360, these are documented to both linear and snap action. The plunger assemblies are identical to that depicted for integrated membrane leaf spring.

This is a hybrid between non-discrete membrane and dual-discrete DIN. A PCB contains FES-301 switch units, but the top case is a uniform moulding. This can be seen in the Fujitsu FM77AV keyboard, dated to 1985.