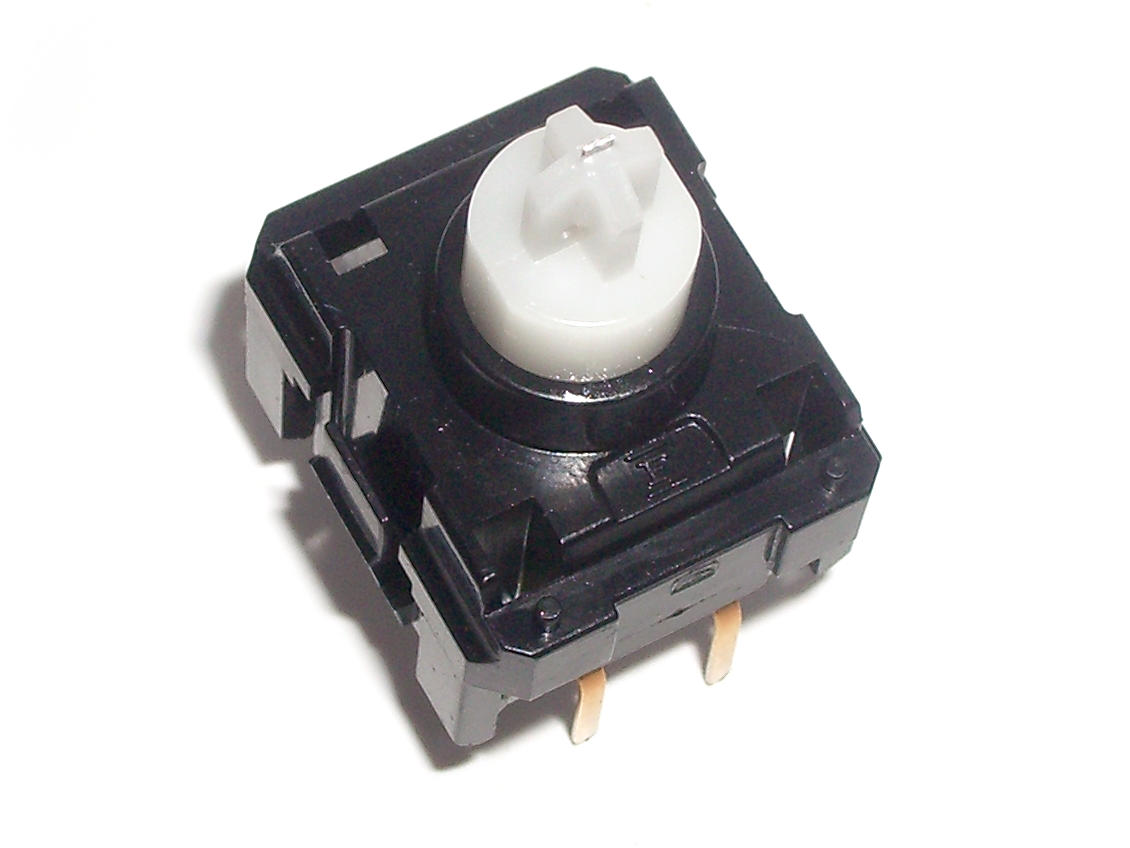 FES-360 Series is Fujitsu’s discrete leaf spring switch. It is commonly known as “first-generation leaf spring”, but examination of Japanese patents and utility models for leaf spring switches suggest that it was a slightly later design (see under leaf spring for more details). It is still listed on the Japanese Fujitsu site under キースイッチ (key switch) page and appears to still be in production.

Use in keyboards seems fairly low, as typically Fujitsu made keyboards and keypads using sheet and dual-discrete switches. One notable example is the Otrona Attaché, which has FES-360 switches on a PCB not made by Fujitsu. dk'tronics in the UK used FES-360 in its replacement ZX81 case and keyboard.

Switch contacts can be either gold or silver (presumably both alloys). As with other leaf spring types, the contacts take the form of a metal dome that is pressed down by a leaf spring onto a cluster of three raised contact points. The contact assembly is a separate clip-in part, possibly derived from the existing sheet key design.

Fujitsu switches are typically clip-on mount. As non-illuminated FES-360 switches are cruciform post mount, standard keycaps will not fit. To resolve this, an adapter (part N550-2800-X067) is required, which was sold separately. This fits inside the keycap and then onto the switch.

Unusually for a four-terminal switch, only one terminal is input. Three of the terminals are output:

(The diagram above applies when the switch is viewed from below.)

As of April 2019, four models are still in production. These are marked as “for specific customers” (特定お客様向), and described in the datasheet as: “特定（既納入）お客様向け製品です。詳細はお問い合わせください。” It appears that they are in production for customers who have already purchased them and require replacement parts; they are not available to new customers. The models listed below with a final-order date are all discontinued.

The discontinued types are all illuminated variants, which were replaced with newer models; illuminated switches are now only available with gold contacts. The diagrams for both sets of illuminated models (current and discontinued) appear identical and there seems to be no details on how they differ.

The data below is taken from the datasheet. They are largely the same as those given for FKB2500 Series keyboards with third-generation leaf spring switches. The only difference appears to be that FKB2500 is 10 cN lighter (49 cN instead of 59 cN).