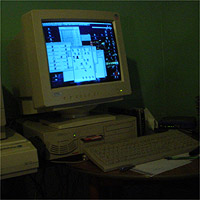 For several years, Firetrack hosted a website using the MacHTTP web server, error acgi extension suite, and MacASP web application server. Firetrack’s usefulness as a server declined significantly, and leaving the Mac running all day and night became a waste of electricity (and it’s a noisy machine). It also ran the abhorrent Rumpus FTP server and, for a while, SIMS—the Stalker Internet Mail Server—for SMTP and POP3. I had a rudimentary webmail client running on it for a while, written in MacASP and AppleScript. The Firetrack website has been relocated to firetrack.telcontar.net for posterity.

Despite Mac OS 9’s terrible reputation for stability, the best uptime recorded on Firetrack was probably over 90 days, although I know I achieved 74 days; that run was terminated not by a crash but by a power cut from a thunderstorm. Another 69-day run was terminated a mains trip from a defective petrol lawnmower. For a combined interactive/server box, routinely achieving several-week-long uptimes is not too shabby for Mac OS.

Firetrack refers to a vertically-scrolling shooter that originated on the Acorn BBC Microcomputer, written by Nick “Orlando M Pilchard” Pelling. My computer has always been referred to as Firetrack, but the website it hosted also uses “Fire Track”; Electric Dreams’s shooter uses each of Firetrack, FireTrack, and Fire Track, in that order. “Firetrack” was the first thing that popped into my head when giving my Yellow Dog 2 PPC Linux installation a hostname. Linux long since cast aside, I picked the same name when I needed a VNC desktop name, and it stuck.

Firetrack was a very advanced game for the original hardware, and it also supported the extended hardware native to the BBC Master (including double-buffered video if your Beeb had Shadow RAM fitted), and additional versions existed for the Acorn Electron and Commodore 64. Nick was also responsible for all of the in-game music. I’ve posted the load music here, “borrowed” from Stairway to Hell, where you will also find the cassette version’s load music. I have long since lost my Firetrack floppy disc, sadly.

Nick Pelling informed me that the first tune in fact was composed with lyrics:

Where are the people
Who made the world this way
Who filled the nights with neon lights
And made the day so grey?
There’s dirt in every corner
And a gambler in each heart
And when I find these people
I’m gonna tear them all apart

The tune is even more delightful when you realise how the lyrics fit into it. The composition of this piece—the primary in-game music—is very rich for 80s video game music.

Owing to what is a very long story in itself, I swapped the factory standard Motorola keyboard of my StarMax with a superior AppleDesign Keyboard from Apple. Granted, it was no Extended Keyboard (with its high quality tactile mechanical ALPS switches), and it had another surprise in store.

You see, Apple decided to give the keyboard two separate backslash keys and omit a backtick (`) key. Where I should have a backtick key (left of Z, illustrated) I had a second backslash key. On a PC, the key left of Z is backslash; swapping between Mac OS and Windows was quite confusing because the key that I expected to be backslash, was labelled backslash but gave me a backtick instead. I grew tired of the key not doing what it said it did, and thus carved away half the backslash with a knife, to leave me with a backtick key.

There should have been an easier approach, given that I obtained two such keyboards from university surplus, and that the other one has the correct legend for that key. Of course, the keycaps aren’t compatible, and the other keyboard is filthy.

Granted, it’s still only half as bizarre as the Amiga 1200 having two blank keys on the keyboard. You have to have an impressively low imagination to leave keys blank on a keyboard.

In a peculiar twist, Motorola and at least one other clone manufacturer equipped their Macintosh models with IBM PS/2 mouse and keyboard ports. I don’t know why you would want to attach a PC keyboard to a Mac (especially as Apple made one of the best keyboards of all time, the Extended Keyboard II mechanical keyboard), but the PS/2 mouse port permits you to circumvent Steve’s wishes and attach a genuine two-button mouse to your Macintosh.

There was at least one third-party two-button ADB mouse, but the PS/2 port allowed me to attach any mouse I had lying around instead of needing to seek out a rare, specialist product. In this case, it’s a superb Microsoft mouse. The only gotcha is that PS/2 mice under Open Firmware have an absurd 1.5 pixel resolution, meaning that the cursor moves alternately in steps of one and two pixels. It’s no concern for most work, but Photoshop selections tended to involve picking up and shaking the mouse mid-selection to jog the one pixel over so that the cursor ends up where I want it.

The mouse I chose is officially described as a “Mouse Port Compatible Mouse 2.1A”, but I always refer to it as a “StupidoMouse” because it’s identical to the classic IntelliMouse, except for the lack of wheel, and the addition of a unique ball cage to ease removal of the ball for cleaning without the ball rolling away. Of course, the very existence of a “mouse port” is an affront to sanity, but the PC always was poverty stricken when it came to ports.

Of course, two-button mouse support is useless without software to utilise the second button, and the now defunct Tri-Bar Software’s TheMouse2B provides support for this. There are some crazy uses to which you can put the right button, such as command-option-shift-control-click, but I stuck to just the control key, which is the Mac’s context menu click modifier. It’s so much easier than having to root out the control key every time you need a contextual menu.

Curiously enough, Tri-Bar Software were located only a couple of miles from where I live.