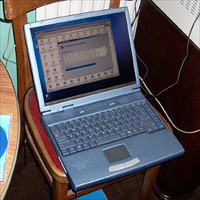 Deathwish is an IPC-branded generic Uniwill N340S8 notebook. Specifications are a bit hard to come by, but it is described as (paraphrased) a high-performance, low-cost notebook with a strong, light magnesium alloy body.

It was one of a significant number of laptops being thrown out at the school where PhAtfiSh works. A third or less were N340S8 PIII 850s, and the rest were Celeron 500s. It feels a bit cheap and nasty, but that only helps it to fit in with my existing collection of cheap, nasty and often surprisingly reliable gear. It’s pretty solid, but it does smell of cooking electronics so hopefully it won’t catch fire too soon!

It is my first proper laptop, woo. (The dead PowerBook 150 doesn’t really count.) I didn’t expect it to be anywhere near as fast as it turned out to be, nor for it to be cute and blue: it was fat and grey in the photo I saw of the stack of laptops. I like my new toy, I do.

The battery is hosed, of course. Not just dying, but dead and long since gone to the Underworld. The DVD-ROM light flashes all the time for no reason, too.

The original plan for the laptop was for it to be a Cy/VOS test bed (along with one of the Celery 500s) but it’s become another general purpose machine. The extra speed has helped me perform Acorn Archimedes emulation, and having Windows XP to hand is valuable also.