I contacted Marquardt to see if they could shed any light on their keyboard switches. They responded promptly, and have provided some detailed information. I have summarised below what is currently known.

The PDFs may be freely republished with permission of Marquardt GmbH.

My own illustrations are a hybrid approximations based on the engineering drawings and adapted to match photographs of actual switches; the 6184.1204 illustration remains effectively the same as the Marquardt drawing given its considerable difference to the only observed example, since there may be multiple variations of illuminated 6814 switch.

Series 6810 is reported by Marquardt to have been manufactured from 1983 to 1995. These switches are very rare, with only two examples discovered to date:

The internals are not known, and may not resemble those of the successor series. The switches in the Tysso PKB-080 are clearly 6180 series, although they are not an exact match for the drawing of 6180.0101 provided by Marquardt.

Series 6184 is reported by Marquardt to have been introduced in 1987; these are the well-known “two finger” switches used in keyboards such as the Model 7065 (“Marquardt Mini”) and “MiniErgo” (reported to be Model 7053, which fits both the model number scheme and the FCC ID). Series 6814 was discontinued in 2000 after a change of focus at Marquardt and competition from the Far East.

I received engineering drawings for two switches from this series:

6814.1204 is not a match for the green LED switch found in the Marquardt Mini: the drawing shows a shorter slider, as though it has been partially depressed. Since 6814.1204 clearly specifies a yellow LED, it is not the same switch, and owing to the scarcity of Marquardt keyboards, it may be some time before we get a clear idea on the variations that existed within this series. 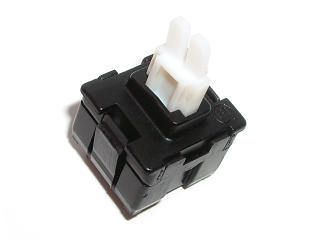 According to Marquardt, the “Two Fingers Typewriter” switch was a custom product made for Olympia for their typewriters, of which no data still remains at Marquardt. Its design is a hybrid between the the “butterfly” switch (confirmed here to have been in use in 1982) and Series 6184, suggesting possibly a compromise to allow the new switch mechanism to be used in a tall keyboard assembly until a complete typewriter redesign was completed. Olympia most definitely used Series 6810, which does suggest that 6810 was internally similar to 6814. If the photographs of the Series 6180–based Olympia Carrera typewriter become available, we may get a date for Two Fingers Typewriter, which will help with understanding the product timeline.

Incidentally, there is a third, very different low-profile switch that shares the same form factor as 6180 and 6184: Unknown Marquardt switch? These switches are tactile, and are very different internally to Series 6184. This single example is dated 1989.