B2H was a Hall effect keyboard series from Omron. The date of introduction is not known; a Japanese patent S55-105916A “Contactless Keyboard Switch” was filed for it in February 1979, but it was described in detail in an August 1978 JEE (Journal of Electronic Engineering) article Hall IC Keyboard Switches Become the Leading Type by Yoshikazu Kitao (pages 27–31). The series was discontinued in March 1990, with B2A-□□2 named as the alternative. B2H switches use Matsushita/Panasonic miniature Hall IC.

All indications are that B2H was only produced in a PCB-mounted low-profile style, although the patent for the switches does also depict a switch outwardly identical to the larger B2R reed switches but with a Hall sensor fitted.

B2H is exceptionally rare. The series was discovered through a single model, B2H-F7W, after it became apparent from reading Omron patents that the Hall effect equivalent of the B2R reed switches would likely be called either B2C (“contactless”) or B2H (“Hall effect”). Both series exist, but B2C is a foam pad capacitive type. No other switches have been found, nor have any B2H keyboards or keypads.

B2H switches can be identified by the series name “B2H” moulded into the top of the switch. The complete model number, or the remainder of the model number following “B2H-” can be found affixed to the side of the switch on a label.

The catalogue entry provides the following description; English translations have been added:

The total switch height is given by Omron as 29 mm, which includes a type A, E or F B2HK series keycap. The switch housing is 12 mm tall and 18.8 mm square, and the total height of the switch from the plunger tip to the stand-offs is around 25.5 mm. At this size, it is fairly large (taller than Cherry M9 for example) but it is over 3 mm shorter than B2R.

The following characteristics are common to the series:

Just as with RAFI RS 76 C, the Hall sensor uses a tiny magnet, far smaller than that of the late 1960s Micro Switch SW Series. The magnet is 2.5 mm long and 2.2 mm in cross section and is made from samarium cobalt. A thin wash of white substance marks the face that points towards the Hall sensor. The magnet rests against a yoke within the plunger. 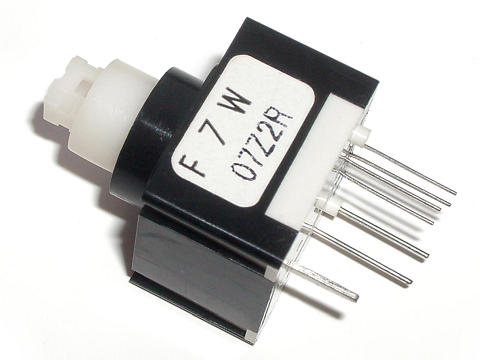 Side, showing the model number (B2H-)F7W and what appears to be the lot number 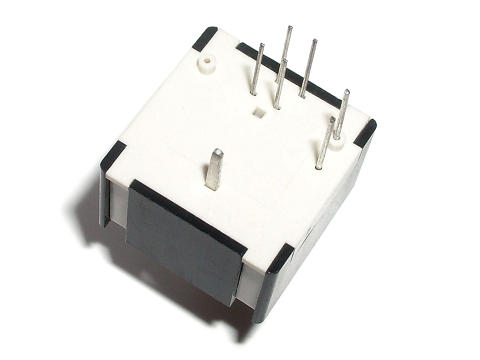 Although the catalogue indicates that there are stepped and sloped arrangements, nothing is indicated as to how this is made possible: there are no indications of either angled keycaps or plungers. The JEE article appears to give more information but this data cannot be accessed. Likewise, the catalogue indicates that a dummy type exists (“出力なし”: “no output”), but does not mention such a model. There are definitely more models than the catalogue lists, as can be seen by the existence of model B2H-F7W.

The base of the switch has nine holes, eight of them numbered. The purpose of some terminals (where fitted) depends on the type of switch. The assignments are as follows:

This can be seen in the following diagram:

The internal diode, where fitted, uses terminals 7 and 8 on one side. Lamp-illuminated switches use terminals 5 and 7 at the two sides, in the same manner as B2H-ME/-ME1; these switches presumably do not allow for a diode. LED-illuminated switches do not, however, use the same terminals as the lamp: they include an internal 510 Ω resistor in line with the LED, and expose the LED on terminals 5 (side) and 6 (front), where 6 appears to double up as the solder anchor. Since the diode is not securely held and the Hall IC legs are flimsy, terminal 6, a T-shaped metal piece, may be intended primarily to secure the switch in place.

There are two illuminated modes indicated for LED switches:

The indication seems to be that the first option illuminates the LED while the key is held: the LED is expected to be connected into the second output from the Hall sensor, presumably externally to the switch. The second option expects an external circuit to drive the LED; here, the circuit diagram in the catalogue omits the diode across terminals 7 and 8. No explanation appears to be given for why the self-actuating illumination would expect a diode in parallel with the LED, also connected to output 2 of the Hall IC.

The switch is also highly unusual in not providing stand-offs to hold it away from the PCB. Terminals 5 and 7 have tubes around the holes that could keep the switch away from the PCB (depending on the size hole drilled into the PCB) but at best the switch would perch precariously on these shafts. B2R has similar shafts for the LED spring legs, but it also has dedicated stand-offs.

The output digit appears to correspond to the model of Hall sensor used.

It seems likely that the corresponding B2R-ML, B2R-S and B2R-A reed switches would have existed.

Model B2H-F7W has a “W” suffix that is explained neither by the Omron catalogue or the 1978 journal article. The journal article depicts two types, B2H-M7H and B2H-ML7, giving us a second unexplained suffix of “H”. There is nothing about the photograph of B2H-M7H to indicate what may be different about it compared to a regular B2H-M7.

B2H uses internal rubber dampers for quiet operation. The following is noted in the JEE article:

Low Noise . . . . . The design philosophy behind the B2H was to reduce operating noise to as low a value as possible. The plunger impact sound was reduced to the absolute minimum by utilizing noise-cancelling rubber for key depression and return.

The rubber dampers were also included in the click-tactile models. It’s not clear whether this was done for manufacturing simplicity or to give a cleaner noise profile, as the tactile models use a mechanism that generates a very loud click sound.

B2H uses a click mechanism invented by Ashikaga Norihiko and Seiyama Shinkichi and described in Japanese patent S53136680 filed in May 1977. Although designated “F” for “feeling” in the model numbers, this mechanism generates a loud click and soft tactility. A pair of identical magnets provide the both the tactile feedback and click sound without any mechanical interaction with the plunger that could cause undue friction. One magnet is inserted into the plunger, and does not move (relative to the plunger, that is). The other magnet is inserted into the shell, and is free to move vertically within a slot. The magnet in the plunger moves past the magnet in the shell as the switch is operated. The magnets are placed such that (according to the patent) their north poles face each other. The magnets repel each other, and this holds the movable magnet in its down position, preventing it from rattling around within the switch.

The force curve of B2H-F is comparatively shallow, and only reaches around 40–45 cN at its highest. A combination of low force gradient and precise tactile drop (of 10 cN) gives it a smooth, clean feel and distinct tactile sensation. The diagram below shows the official force graph as published by Omron in JEE, and Jacob Alexander’s measured B2H-F7W force graph taken from a new old stock surplus part from Japan.

As with various other graphs from Jacob, the readings in proximity of the zero travel region are strange; here, that portion is shown with dashed lines to indicate uncertainty.

The operation of this mechanism is depicted in the following sequence of diagrams:

B2H can be used in both sloped and stepped profile. Stepped profile was achieved by angling the switches relative to the PCB, as shown in the following diagram from the 1978 JEE article:

The article did not detail the means by which the switches are propped up within the stepped profile, and the illustration did not clarify this either. The slope angle in their illustration is 12.5°, which is the midpoint of their typical tilt range of 10–15°.

“□” denotes the keycap colour code from B2HK, which if omitted indicates a standard grey keycap.

A number of B2H keyboard models are known from Omron’s discontinuation notes (see further down). The following items were included in the catalogue entry:

Based on the discontinuation data, actual keypads were likely to have more complex model numbers.

No B2H keyboard has ever been found.