Series 725 (alternatively 725 Series) was Hi-Tek Corporation’s DIN-compliant discrete mechanical switch keyboard series. Linear, tactile and momentary switches were offered; other variants included corner illuminated, alternate action, and higher weight for space bar. The series was created to meet German standardisation. So far there has been no evidence to suggest that switches were ever sold separately. As such, the switch designations remain a mystery, leading to various ad-hoc methods of naming the many variations. (Chances are, the variants would only have non-schematic numeric part numbers anyway, as with the preceding switch types.) 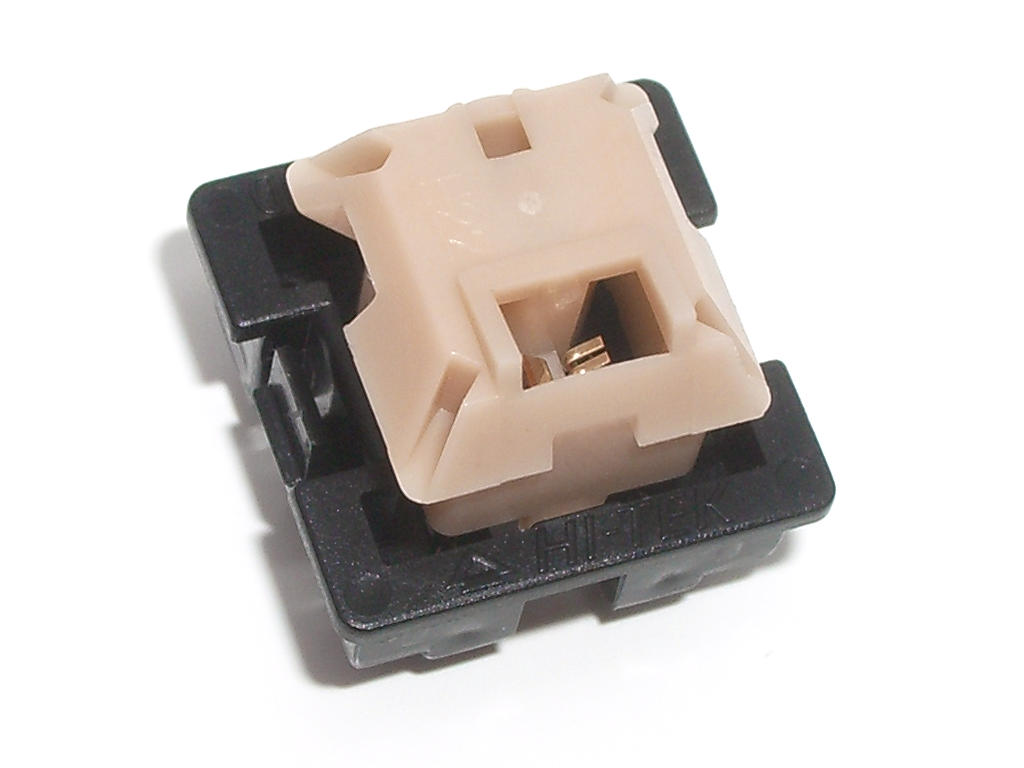 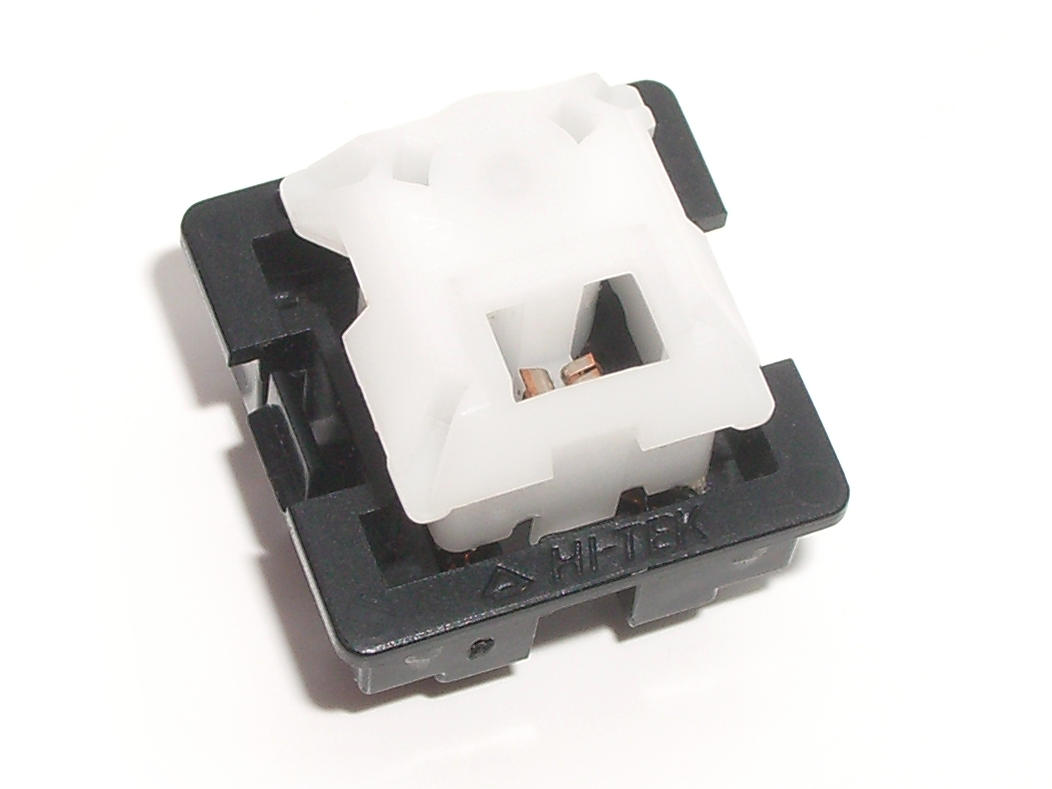 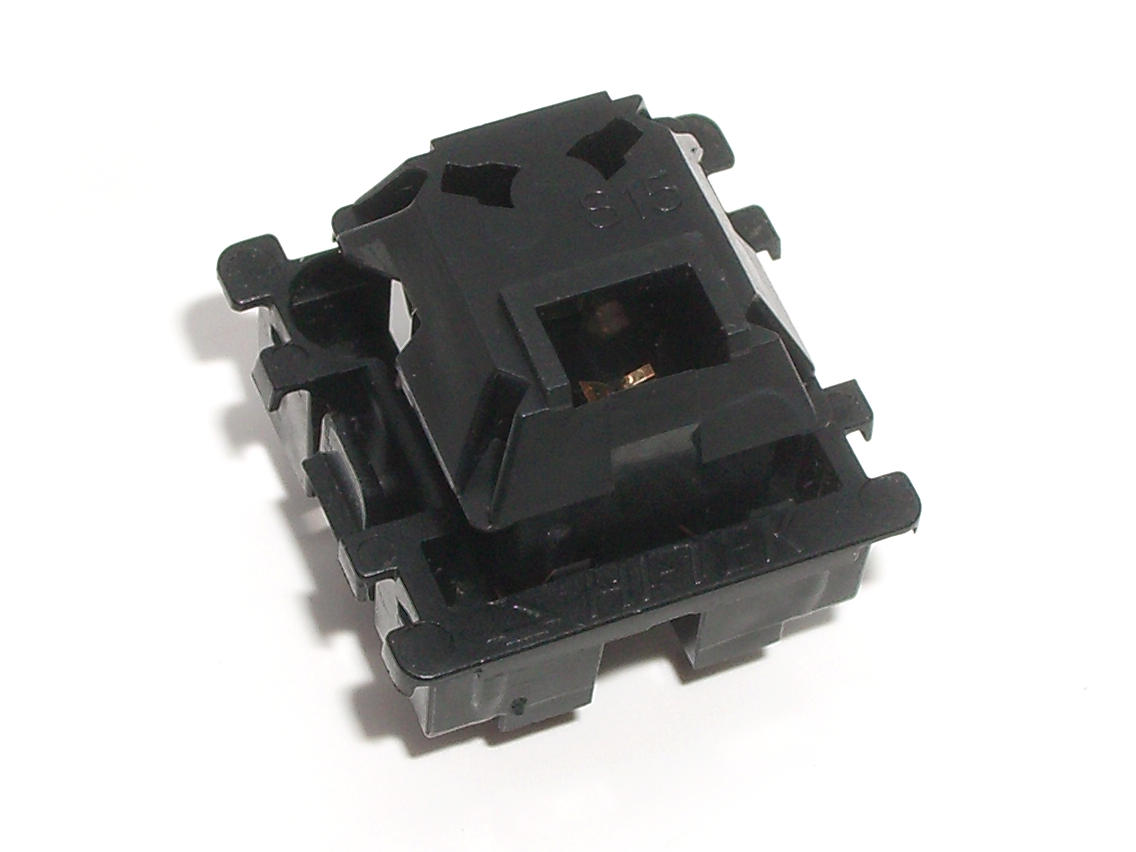 Series 725 was introduced around 1983. The European patent—EP0124206A1 “Low profile keyswitch”—was filed in February 1984, citing a priority date of a US patent application from a February 1983 patent. The US patent does not seem to exist, as the US Patent and Trademark Office has no record of any patent with the application number in question. The specification and design of the switch came from company founder Don Hallerberg, and it was engineered by Robert Bessire, whose name appears on the patent, suggested by D’Milo Hallerberg to have been for political reasons. Bessire’s own design for the new switch had been scrapped and replaced by Don’s.

From the examples collected by Sandy55 on his NMB Hi-Tek page, Series 725 remained in production until at least 1997.

Not long after Series 725 was introduced, it was fully retooled, with the rounded plunger design being replaced with an angular style. One possible theory is as follows:

As such, it is possible that NMB felt that shipping the tooling to another country would be too much of a risk: it would mean a cessation of manufacturing for an undefined period, as any mishaps with import, installation, production etc. would mean an end to manufacturing output until it was resolved.

From this it could be suggested that NMB had replica tooling constructed and tested in Thailand, built to a revised and simpler design for cost efficiency and ease of construction (perhaps from what was learnt from making the original tooling) and once the Bang Pa-in factory was up to speed, the US tooling was scrapped.

There is, however, some doubt as whether this is exactly what happened. There is a Tandy 1200 HD keyboard with a switch type that falls in between the “US” type and “Thailand” type. It has the redesigned plunger style associated with Thailand, but the “eye” is circular (as with the “US” type) instead of square like the “Thailand” type. This example is marked as being manufactured in the US, and it has the same brand of support chips (Mitsubishi) as the earlier American example, instead of the Texas Instruments chips from the later Thai example. All three seem to be around the same age, judging by the dates on the ICs. It is as though retooling occurred in the US first, and then new tooling was made in Thailand first to an almost identical design to the US tooling. The suggestion is that the redesign occurred for other reasons, shortly before the takeover. It is still likely that fresh tooling was produced in Thailand, but it quite possible that this had no part in the change of design of the switches.

The series name refers to the height at the centre of a home row keycap, measured from the bottom of the PCB, measured in thousands of an inch (0.725″ or 18.42 mm):

(The illustration above is from Hi-Tek’s product literature; see Documentation below.)

The following details are taken from the RT-8200W brochure. The force and travel figures are standard for NMB keyboards.

All documentation was provided by Susan Kennedy (formerly of NMB) and scanned by Benjamin Rockwell, except where otherwise noted.