Cherry drawing TS 00006, the original MX part number schema, first drawn in November 1982, lists MX1A-11xx (Black), MX1A-21xx (Linear Grey), MX1A-31xx (Lock), MX1A-A1xx (White) and MX1A-B1xx (Click Grey). The drawing was last modified in September 1983, which suggests but does not prove that these models were all available by that point. (Not all of those types were necessarily included when the drawing was originally created, either.)

According to Hirose, “German MX switch was based on Japan version”. MX1A-0NNN is the part number given in Hirose’s datasheet, with 50 cN actuation. No Hirose patent has been found for linear MX.

The Yamaha QX3 Digital Sequence Recorder service manual gives the keyboard switches in the machine as MX1A-0NNN. Correspondence between UncleFan and online sellers indicates that these switches are both orange and clear, and within the same QX3 unit there can be a random assortment of both colours. Examples depicted online show them as orange. Surplus parts obtained from Yamaha in 2019 (the last three available) had clear stems.

The example below is one of the last three NOS MX1A-0NNN stocked in the European parts centre for Yamaha. It has the “A” movable contact type. As expected, it is slightly lighter than MX Black. 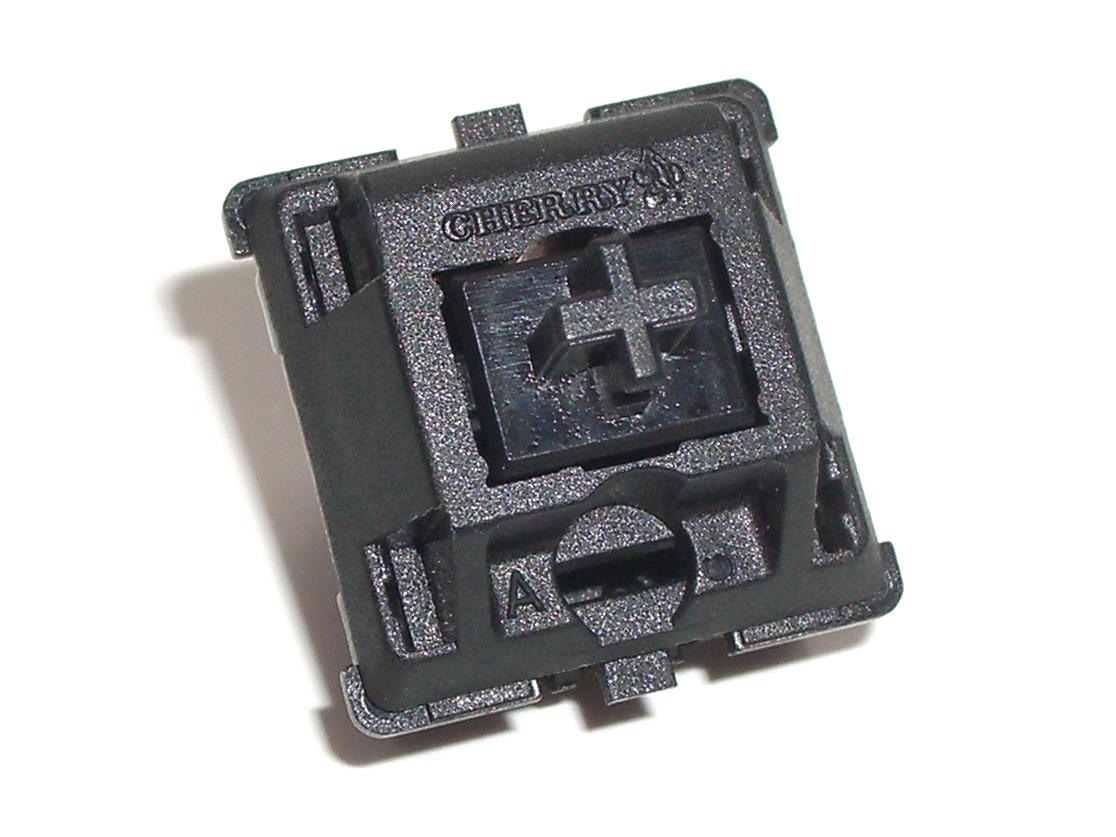 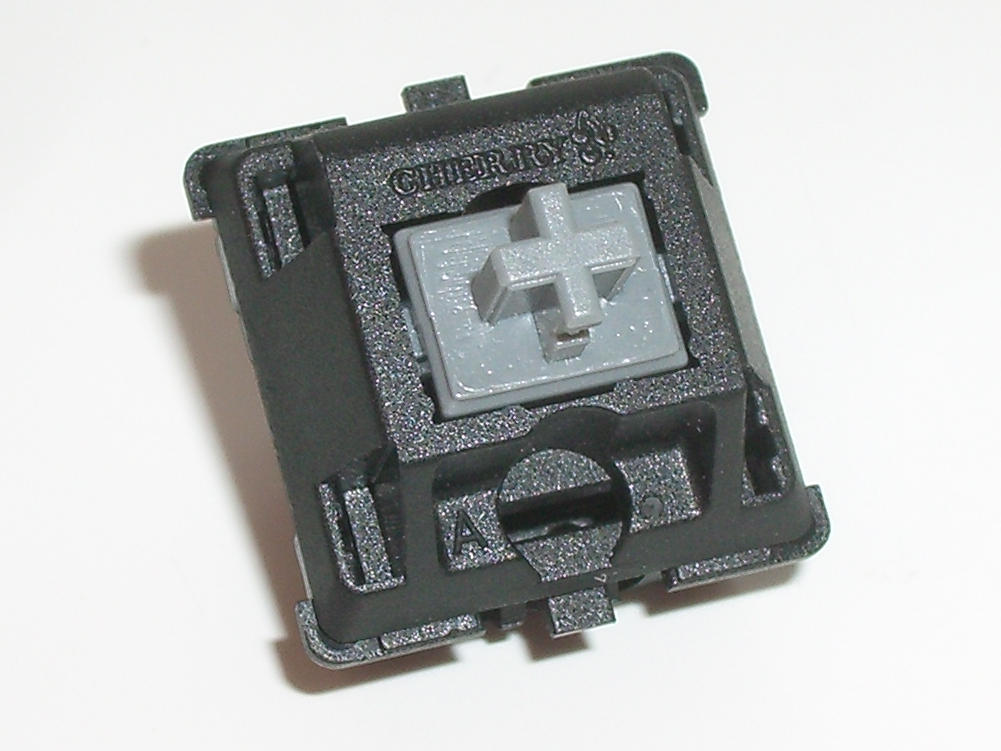 In the 1982–3 part number schema, this type is given simply as “grau” (grey). In older keyboards, it was found as a pale grey with a subtle cream tint. In the 1988 part number schema the grey colour was formalised as “grey 37”. The plunger is currently a medium grey.

In US-made keyboards made around 1984, space bar used a black switch marked with a red spot of paint on the bottom for differentiation. It seems that Cherry US did not use standard German space bar switches.

The lack of illustrated examples from either factory makes it hard to be clear on what colours were used and when. 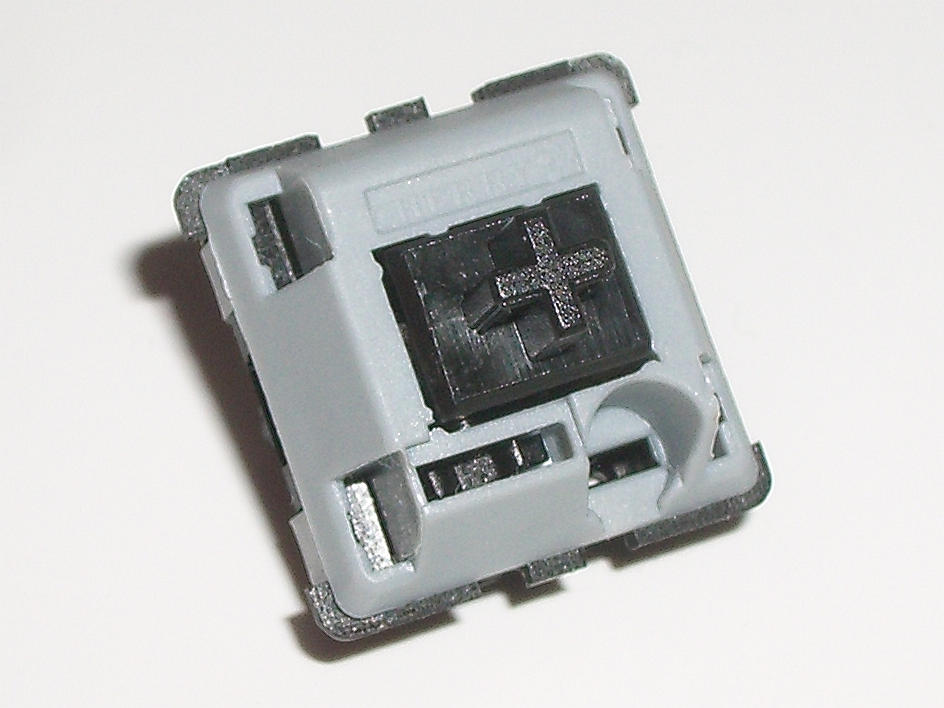 MX Lock was found in a Xerox 1109 type 2 keyboard dated 1984. It was omitted from the German 1985 datasheet, but it was included in the 1982–3 part number schema. Although the aforementioned Xerox keyboard was made in Japan, the MX Lock switch was the one switch type with an 8 mm keystem intead of a Hirose keystem. MX Lock uses the same rotating-wheel latching mechanism as Cherry gold crosspoint, offering smooth operation without the detent feel associated with heart cam designs. This switch does appear in the 1985 EEM advertisement.

The following distinct types have been observed:

The all-black type may well be US-made, as it seems US-made MX switches were not colour-coded at their introduction. As Hirose was already importing M6 into Japan, they may have also imported the US-made alternate action switches, possibly out of a lack of need to create tooling for these domestically.

The grey colour scheme used in Germany was discontinued when supply of the pigment ended, and the colour arrangement was changed to black with a clear plunger. 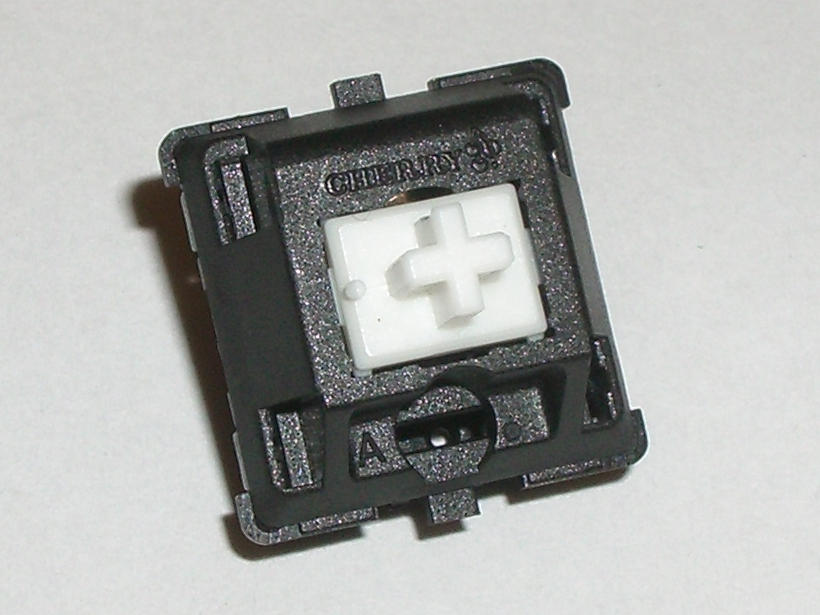 In the 1982–1983 version of the MX part number schema, MX1A-A1xx is listed as “natur”, meaning that it was originally unpigmented. This is not unexpected, as Cherry Germany tended to use black and clear as the two main colour options in switches. The white pigmentation was added by 1988, as in the 1988 part number schema it is given as white.

Further down, it also states:

This brochure appears to be dated November 1986. At this point, the primary options were linear or tactile, although MX White is curiously described as “tactile click”. Additionally, you could select linear with “acoustic” feedback (“audible click”).

This serves to strengthen the argument that MX White was not intended to be a clicky switch. This is something that Günter Murmann has unfortunately neither affirmed nor denied. 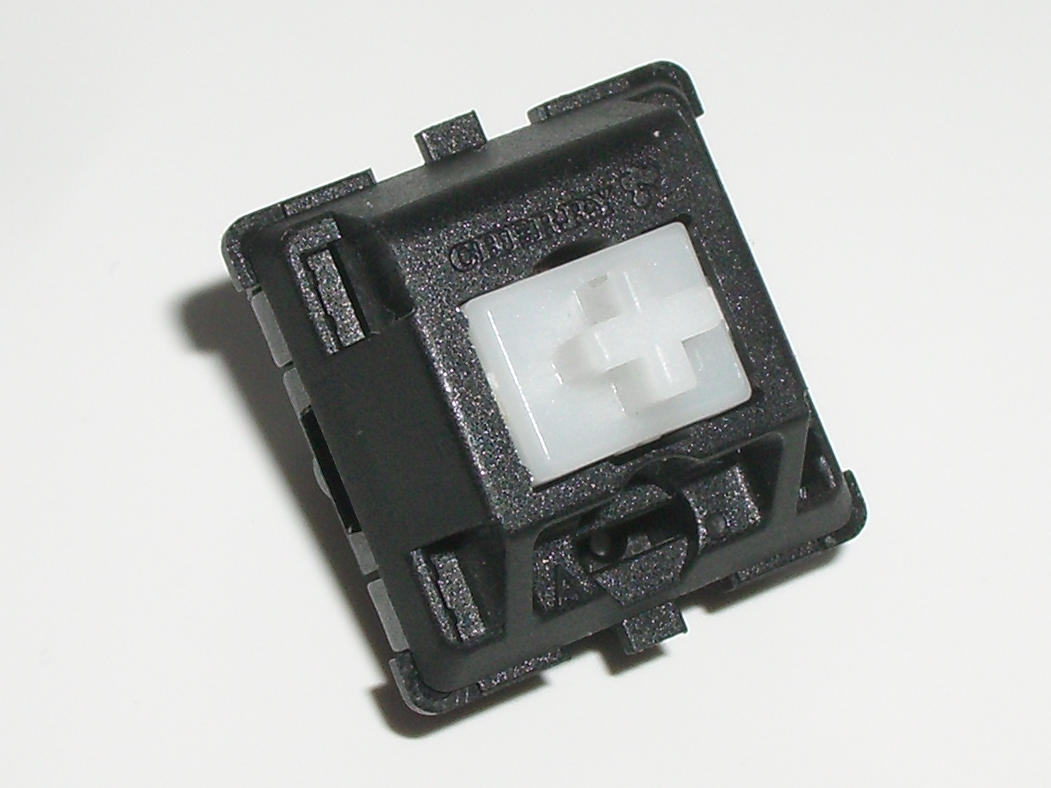 It may forever remain a mystery why Cherry chose to apply pigment to the slider of the existing MX1A-A1xx type. It is possible that both MX1A-A1xx and MX1A-C1xx were unpigmented simultaneously, with the “cam” on the slider being the sole means of identification. That is, black may have denoted linear, and colourless, tactile. The use of white pigment for MX1A-A1xx may have been applied at a later date when the cam was not felt to be a sufficient clue, although even then, one would imagine that a pigment more obvious than white would have been chosen. The purpose of the cam itself remains a mystery. 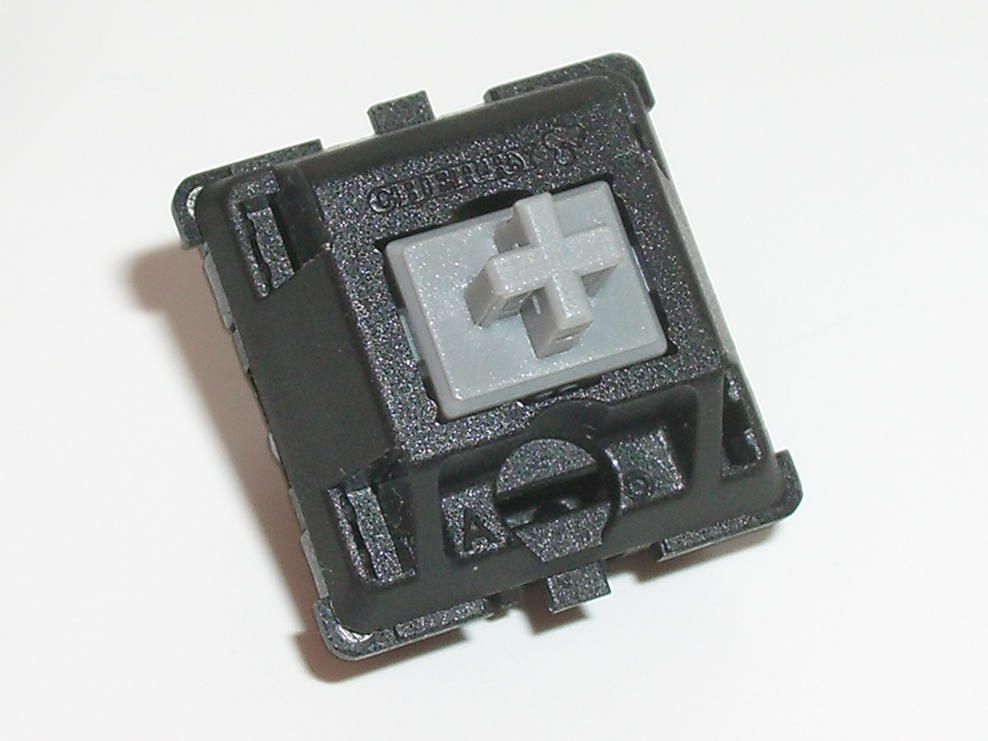 This is the space bar counterpart to MX Clear. There was no 2016 datasheet available for it. 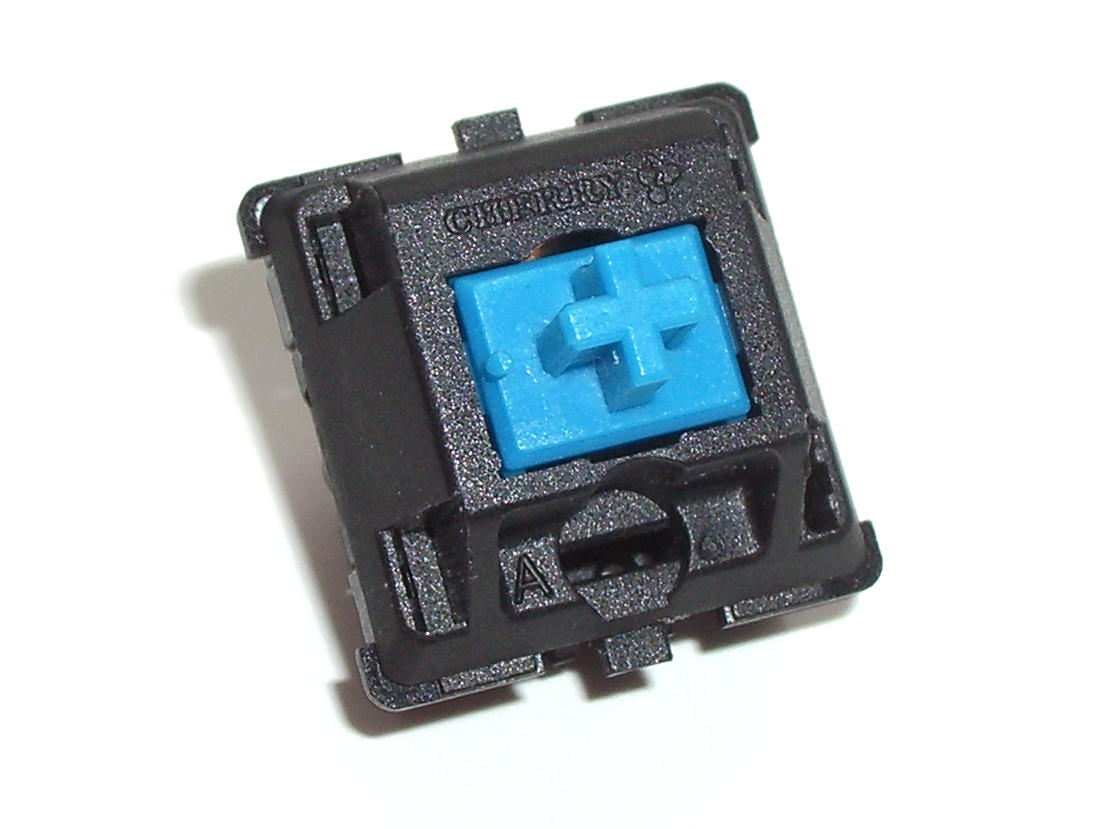 Cherry give MX Blue as being introduced in 1987. No further details are known about its introduction. This model, too, appears to have been introduced without slider pigment, in the form of “Type B” vintage MX White. This would suggest that the additional pigmentation was applied in 1988. 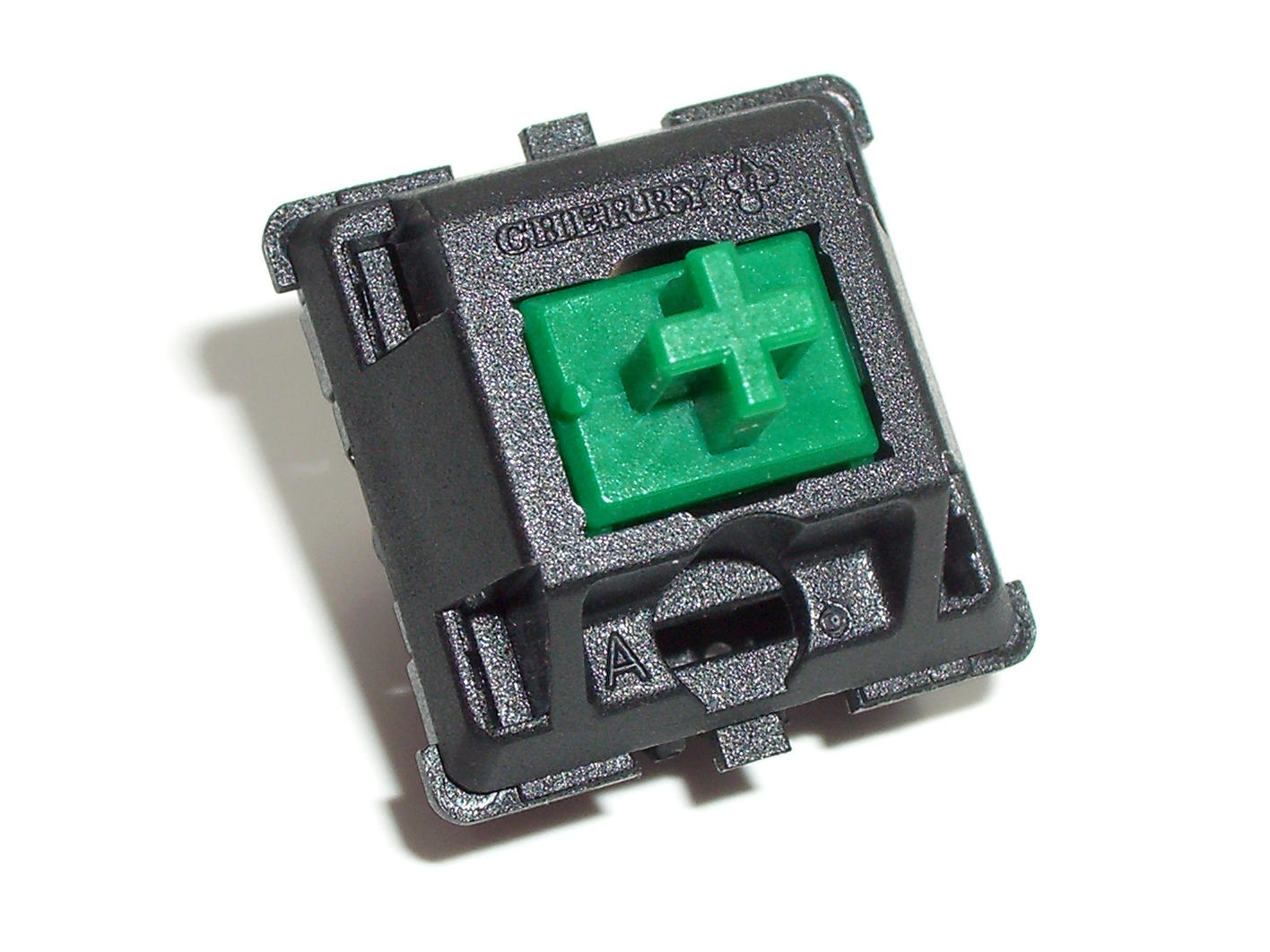 This is the space bar counterpart to MX Blue. Strangely, it was not assigned a grey shade. 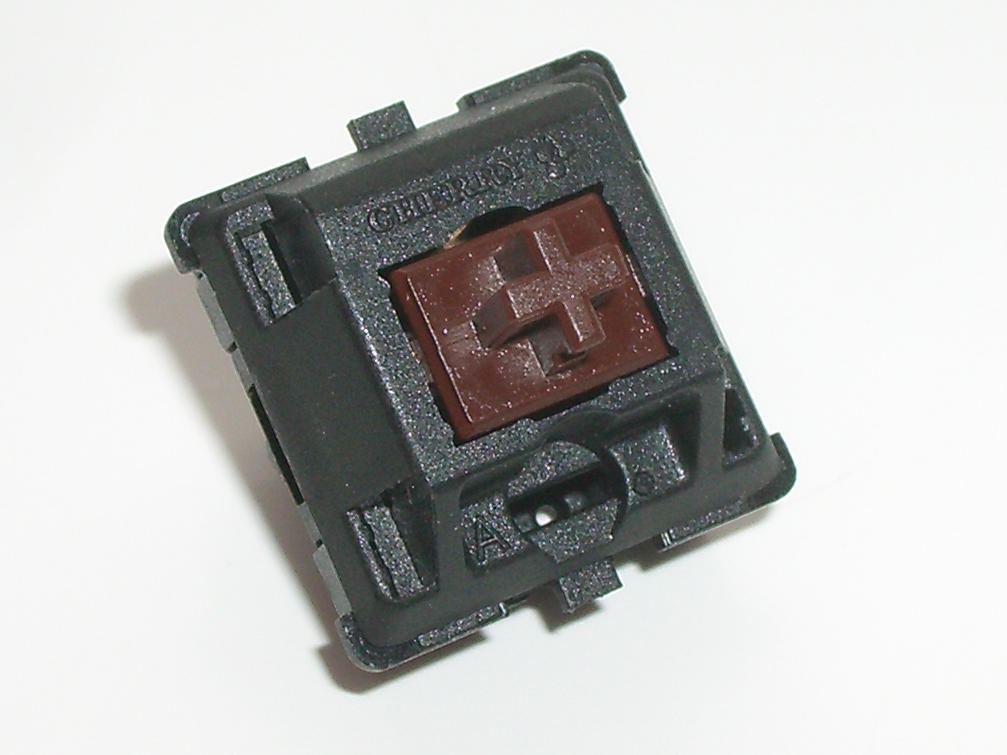 This was a custom part introduced in 1992 for Kinesis, and made available from 1994 (according to the Deskthority wiki, unreferenced). Cherry generally do not use this in standard products. 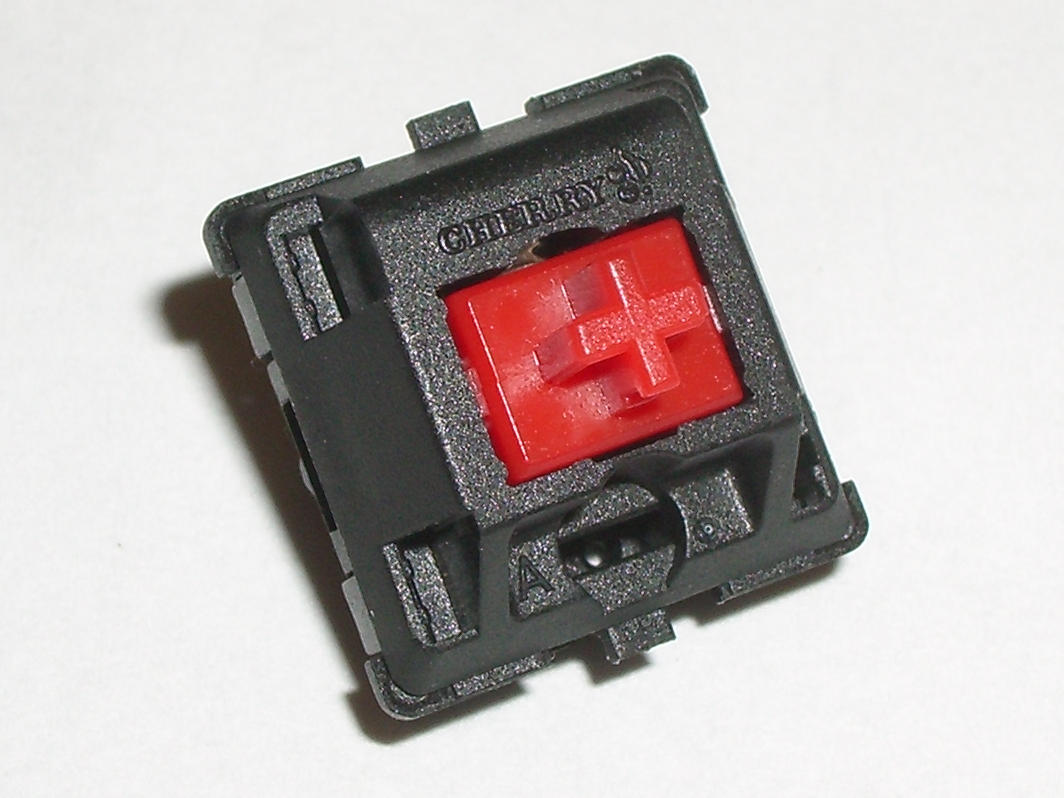 This was a custom part introduced in late 2008, as a limited run (according to the Deskthority wiki). However, a few years later it had been reintroduced as a permanent entry in the range. As a linear switch, this should have followed on from MX Lock as MX1A-41xx, but it was bizarrely placed some distance into the tactile range as MX1A-L1xx. 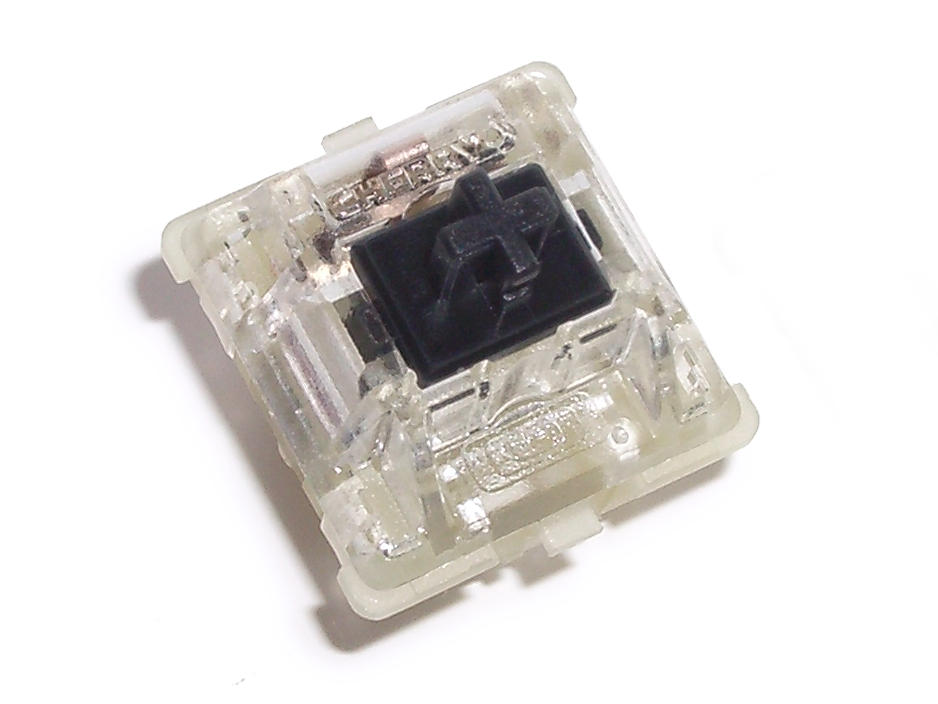 The part numbers are the same as MX Black, except that N and W in the final position are replaced with A and B. 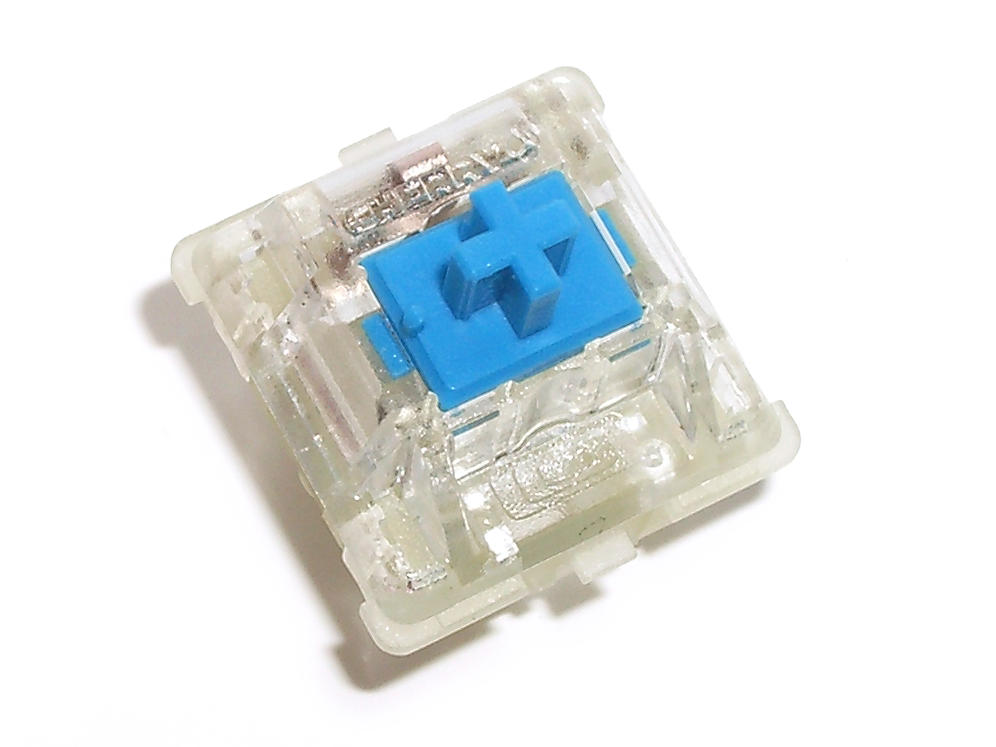 The part numbers are the same as MX Blue, except that N and W in the final position are replaced with A and B. 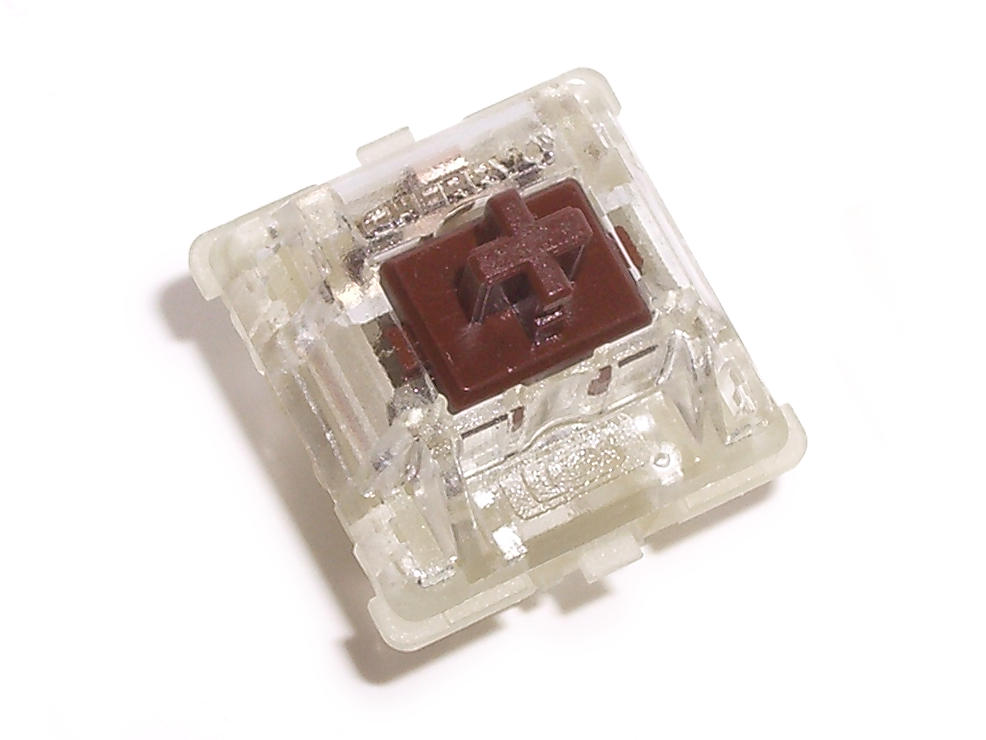 The part numbers are the same as MX Brown, except that N and W in the final position are replaced with A and B. 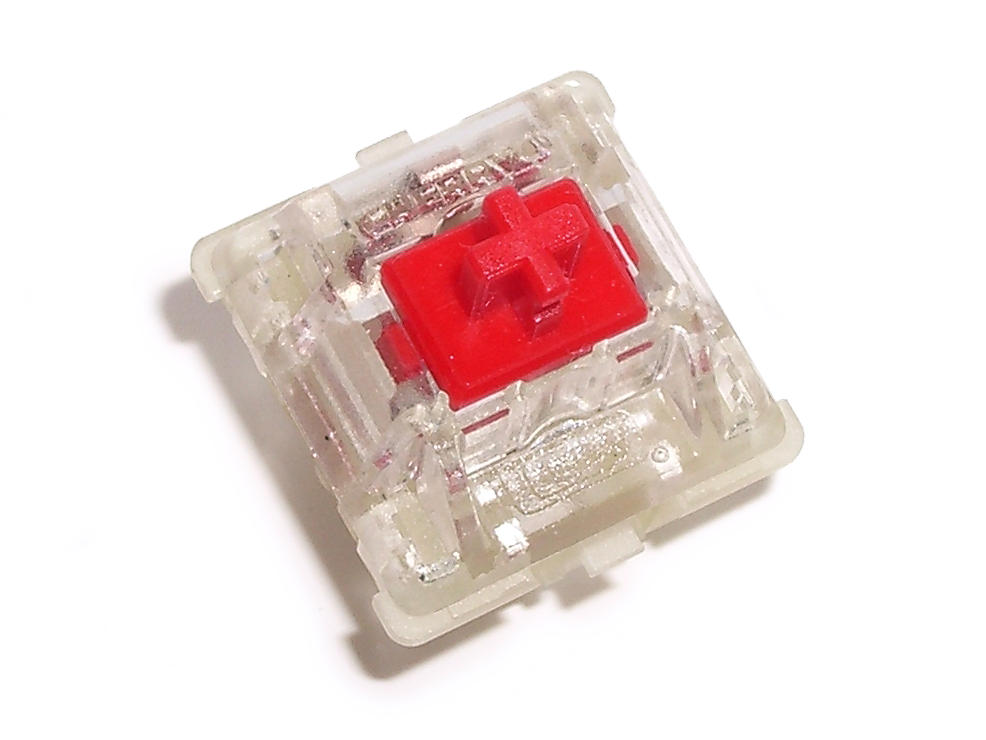 The part numbers are the same as MX Red, except that N and W in the final position are replaced with A and B. 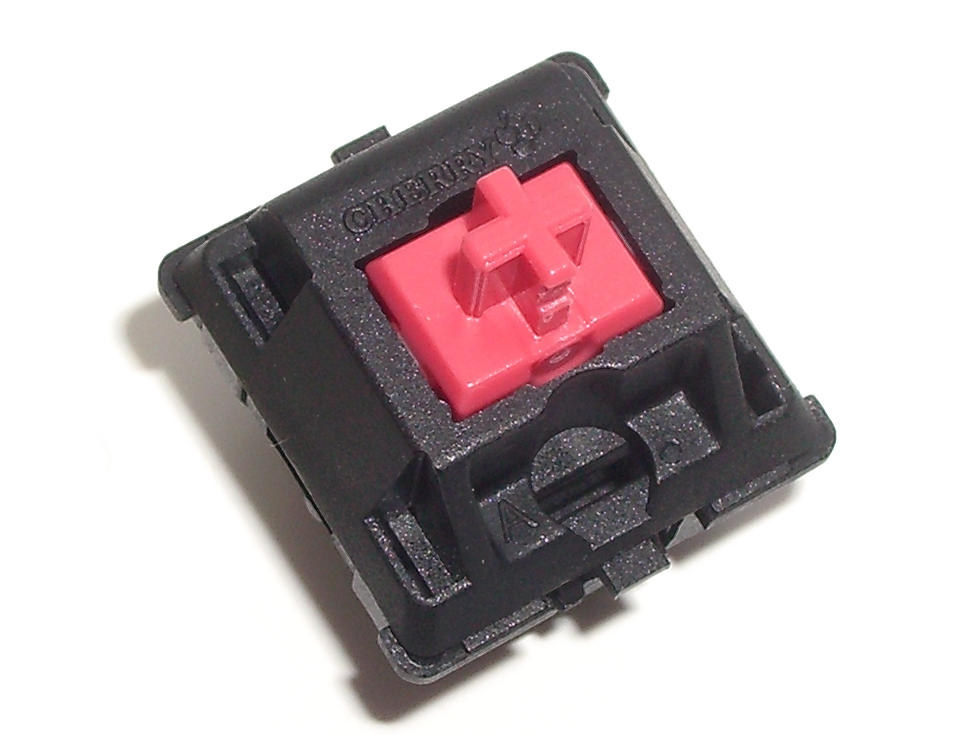 MX Silent Red introduced a damping mechanism to the switch, that softens both the upstroke and downstroke impacts of the plunger. The term “silent” is a widespread misnomer, as silent physical keyboards are fundamentally impossible. Further, “silent” was also applied by Metadot to their MX Brown keyboards, which are loud compared to standard rubber dome keyboards, and extremely loud compared to notebook keyboards. 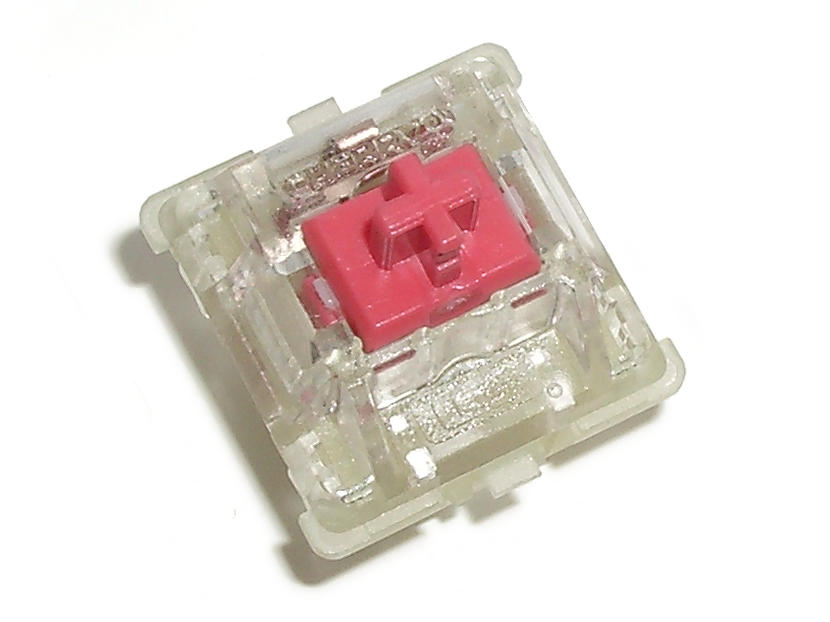 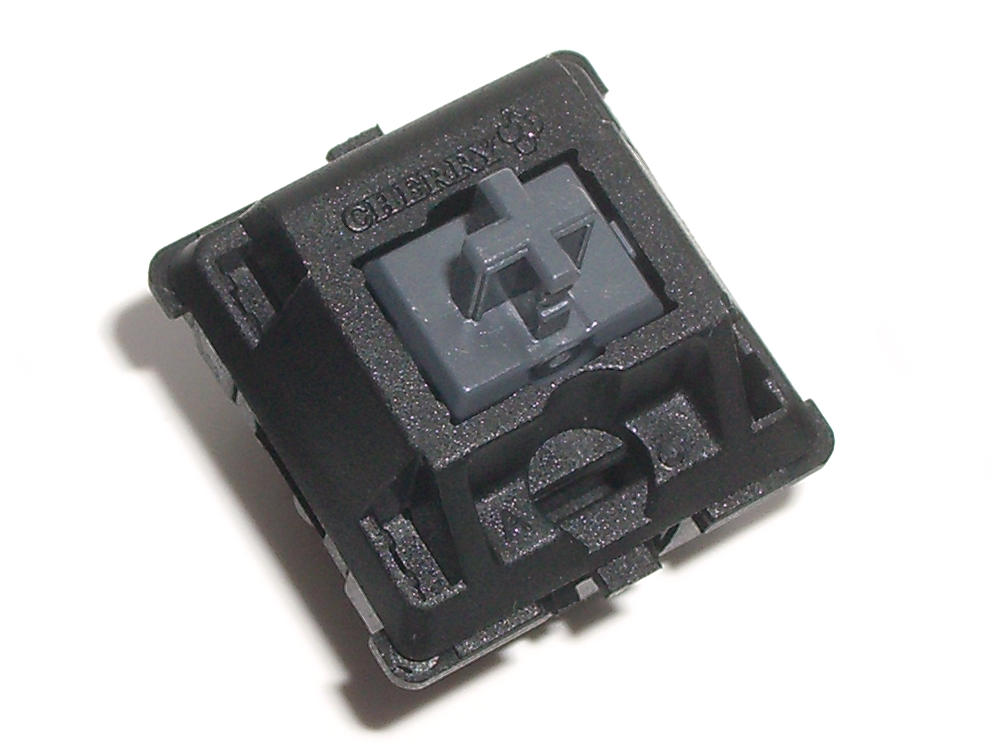 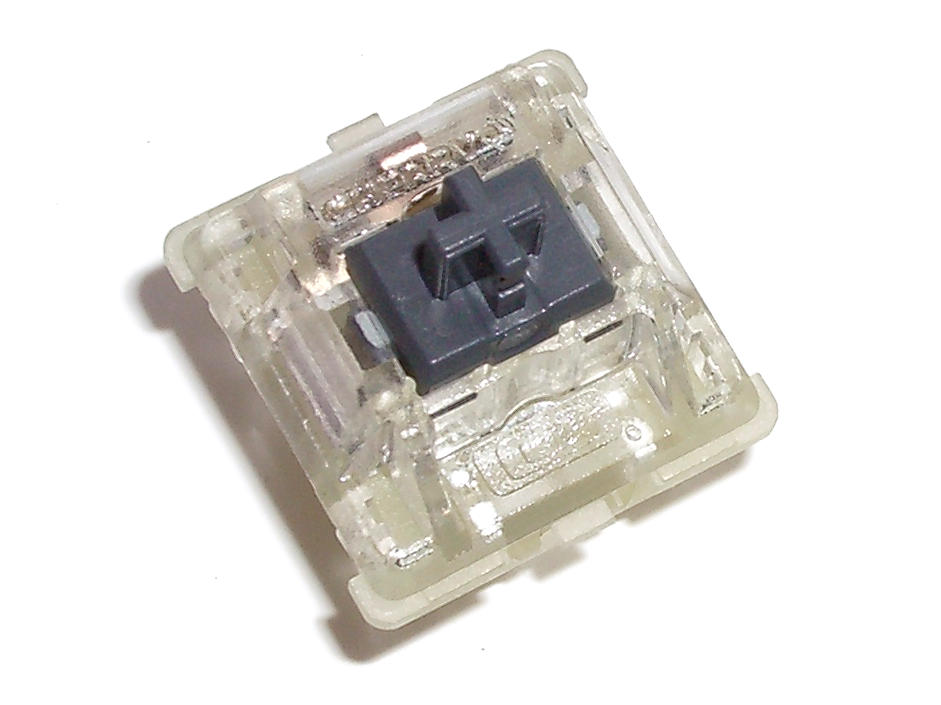 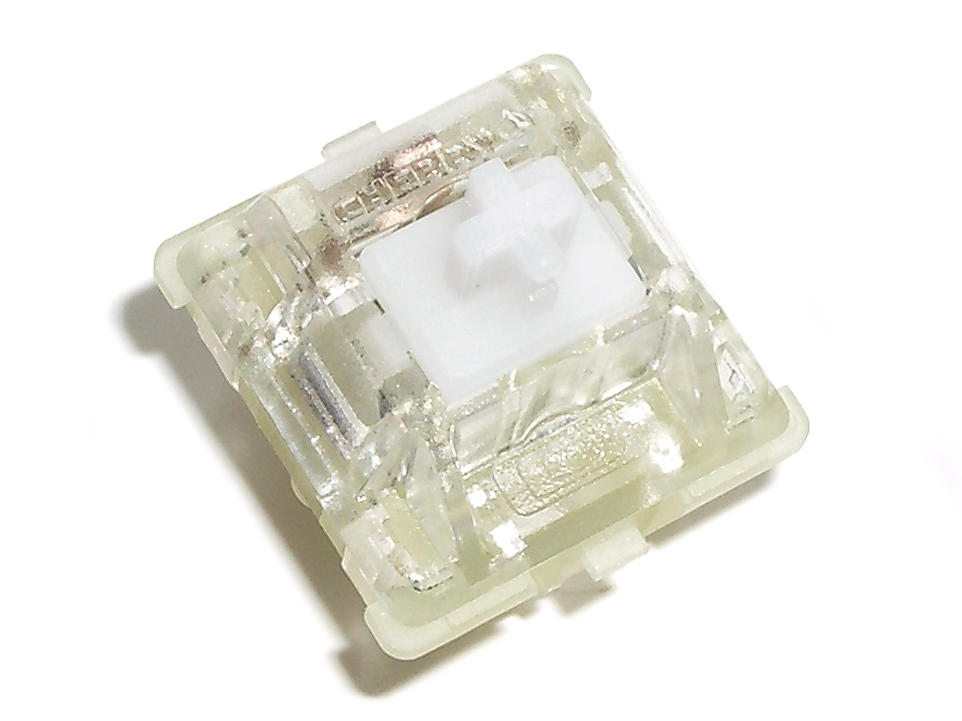 MX RGB Nature White was a short-lived model that aimed to bridge the gap between MX Red—held by some to be too light and too easy to accidentally press—and MX Black, which many people find too stiff to type on for long periods. In practice, it ended up virtually indistinguisable from MX Black. Unusually it was offered as a single part—MX1A-41NA—with no options for diodes, jumpers or fixing pins. 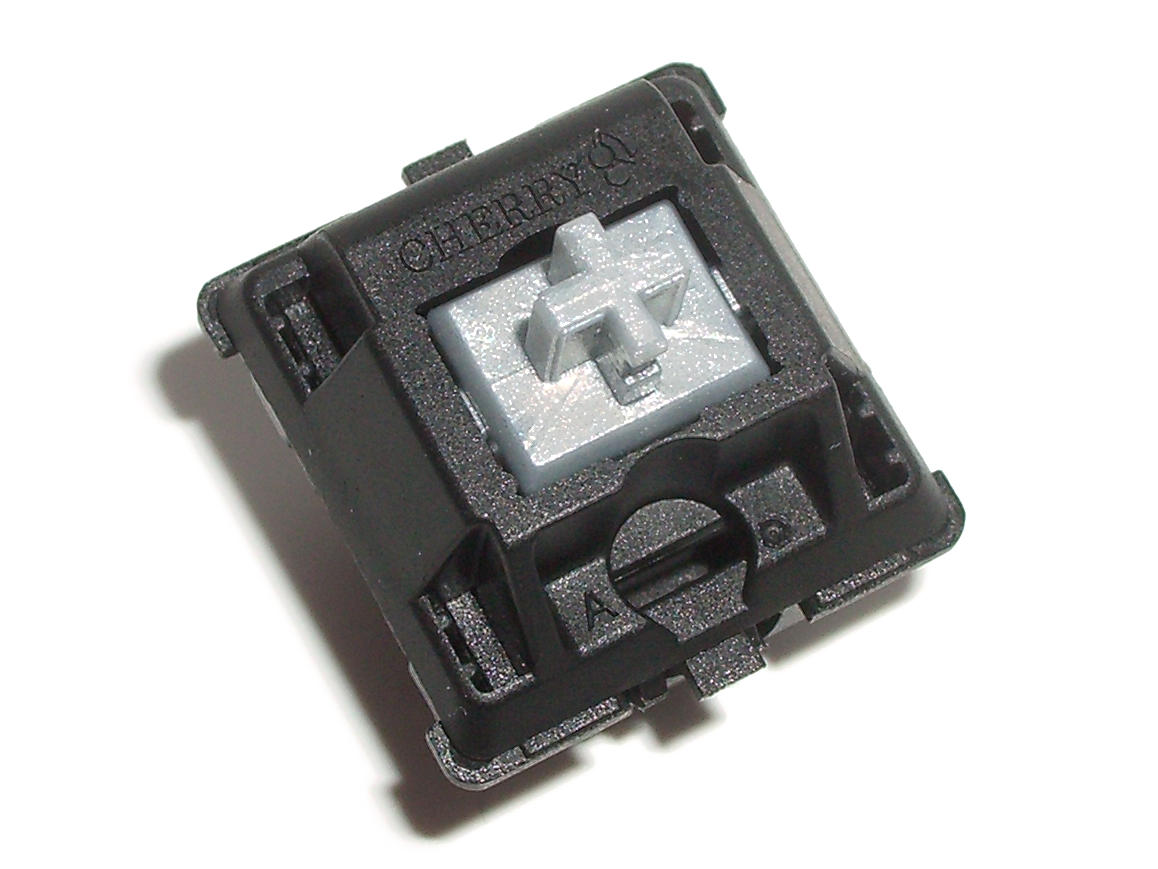 MX Speed Silver was introduced for gamers. The pretravel distance is reduced, making the switch “faster” as it does not need to be pressed as far (and thus not pressed for as much time) before it actuates. The total travel distance is also reduced. Operating force is 45±15 cN as per MX Red, but the force gradient is steeper. 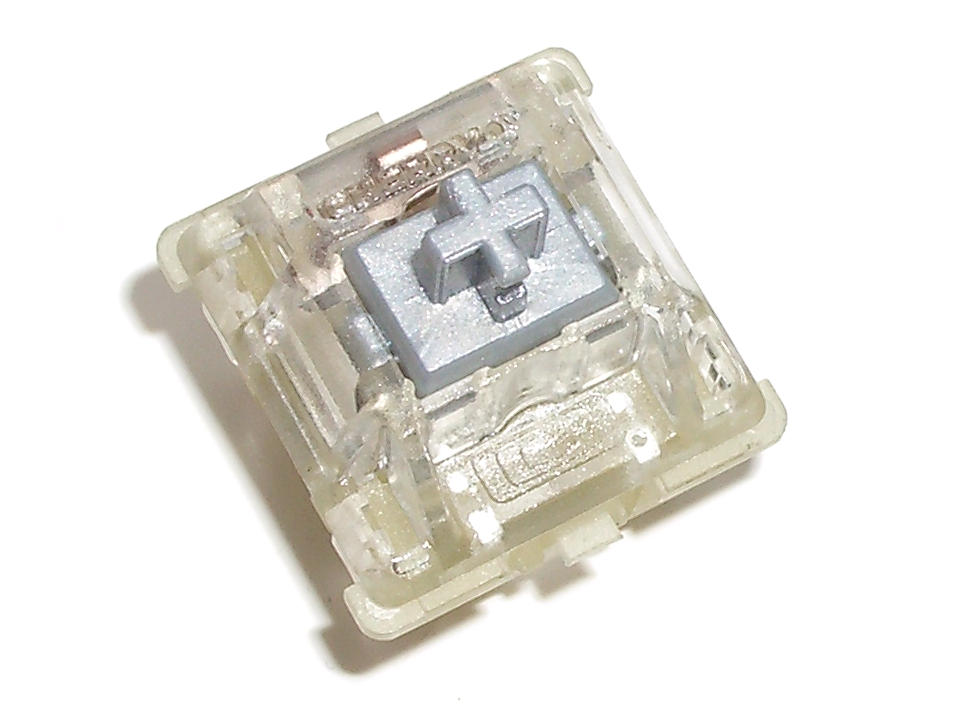 The part numbers are the same as MX Speed Silver, except that N and W in the final position are replaced with A and B.

Custom types have a letter instead of a number in position 6 of the part number (see MX part number schema). Although “N” for Hirose types is a customisation, these are classified as standard switches, above. “G” types denoting German-made customisations are covered below, along with types with no known part number.

The term “MX Super Black” refers to one or more models of MX Black with a heavier spring. Discovery of the variety of custom types indicates that there are multiple weightings applied to MX Black switches, and the various “super black” types are likely to be custom types.

This is a heavy version of MX Black. According to Cherry, as of May 2018, these were last in production in January 2016, with an order for 240,000 pieces. They had been available for sale at Arrow, who denied all knowledge of them, although the entry remains on their site as an “Unclassified” “Desktop profile keyswitch”. SwitchMod purchased these from Arrow and resold them as “Mega Black”, and there is a force curve for one of these.

The purpose of these switches remains unknown.

“Olympia linear clear” is a custom type found in some AEG Olympia typewriters. The stem shape and keycap mount differ, and the PCB–plate distance is 1 mm greater while the shell overall remains the same height. Due to the dearth of typewriter repair manuals (unlike IT equipment service manuals, typewriter service manuals are not generally available) it may prove impossible to find the part number for this type.